3D print finishing: what are the solutions? 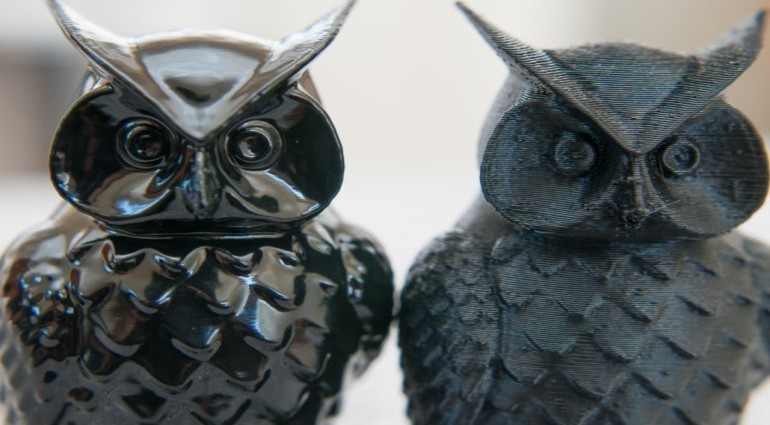 Despite being a young technology, the world of 3D printing continues to change very quickly. Gradually taking shape are the needs of engineers, makers and industries that use this technology, and each of these players has more or less specific difficulties. The most debated issue is a continuous climb towards the search for a perfect finish. Very often, especially using FFF printing technology, the object that comes out of the 3D printer requires additional surface treatments. So what are the current 3D printing finishing techniques?

One of the first products, created to solve the 3D-print finishing issue, is a two-component resin called XTC-3D, made by the US company Smooth-On.

This resin is produced, at the time of use, by mixing two liquids, in a similar way to different types of two-component glues.

The company maintains that the product does not work by dissolving the plastic surface, but is rather a coating capable of levelling the surface of the object. 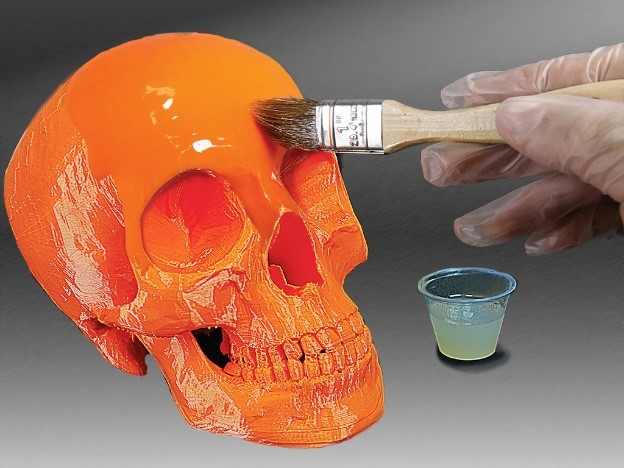 The process should be able to finish the surface in 4 hours (obviously this depends on the size of the surface area and on the temperature of the part to be processed). This resin is able to adhere to most plastic materials used in FFF 3D printing. 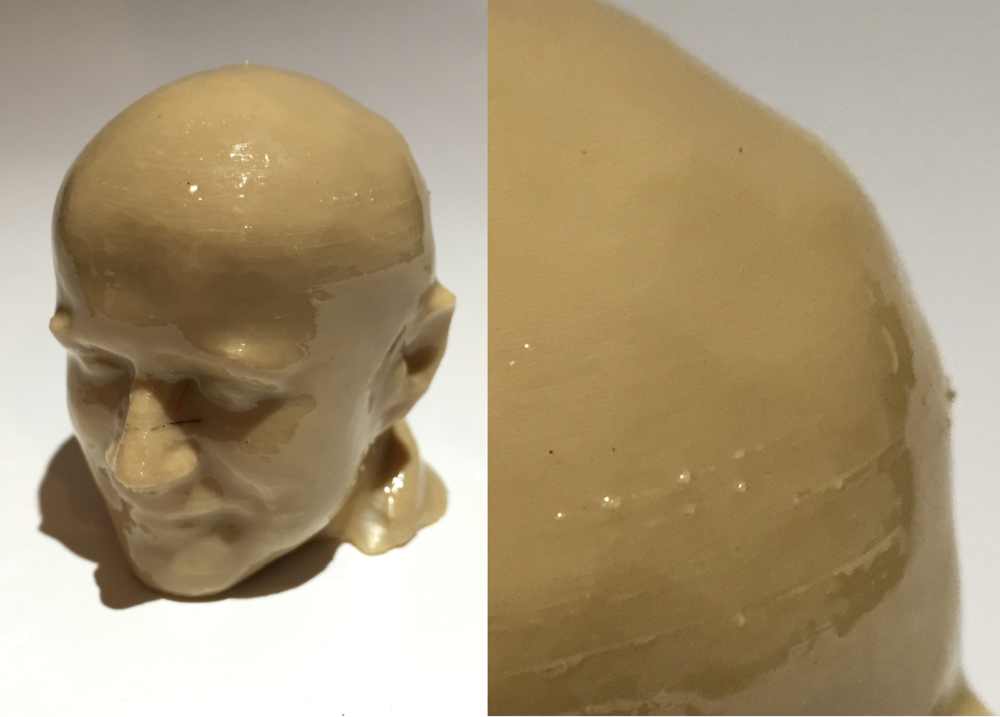 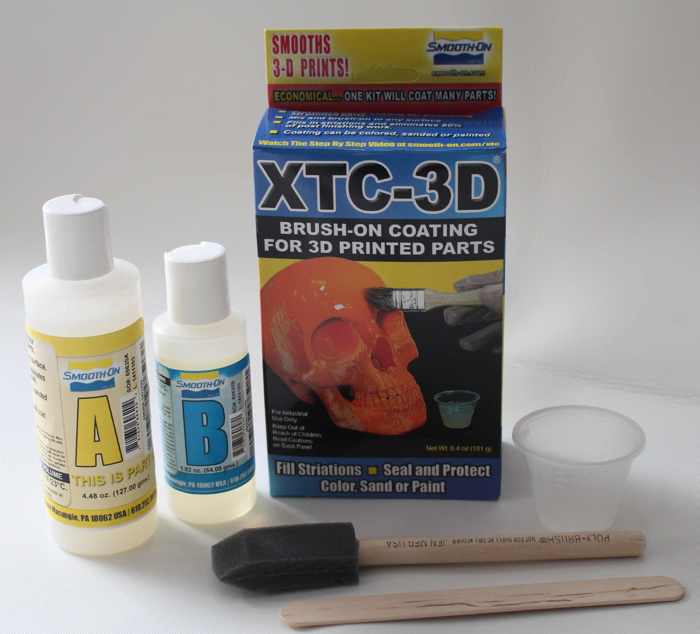 Offsetting these benefits are a number of fundamental drawbacks such as:

1. XTC-3D is a solution that requires a certain amount of skill and experience on the part of the user to obtain satisfactory processing.

2. Using this type of solution for mass production is unthinkable

3. The processing time is very long; in some instances it can even equal or exceed the printing time itself.

4. The result of the resin applied on the end product is one only and cannot be replicated

5. Some 3D-printed objects have parts that are hard to work on with a brush

6. The application of a coating layer in effect increases the nominal size of the object, causing a loss of designed geometry

7. The product, during application, is potentially toxic and to use it the operator must always wear gloves and employ adequate protections

The resin is distributed in Italy by FERBA. 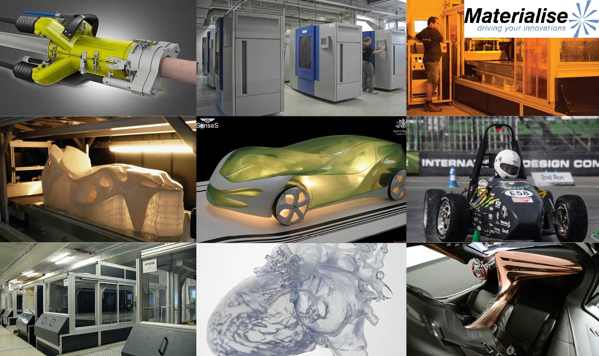 Currently, the solution for those who want to obtain a high standard of surface finish is to approach a number of companies specializing in these kinds of treatments. This is the case of the Dutch company, Materialise. Active on the market for some time, it is one of Europe’s leading 3D services.

It deals with every kind of industry, from automotive to healthcare and can print a variety of materials for its customers. Materialise uses multiple 3D printing technologies: SLS, PolyJet, FFF, colorjet and, besides this, works with pretty much every type of material existing on the market.

The Dutch company has also carved itself out a specific space, which now qualifies it as the only true leader in the field of surface treatments for 3D printed parts. All types of customization are possible, from classic white to black gloss, satin-finish and chrome. In point of fact, this is the right choice for anyone seeking the highest standards of 3D printing finishing.

Other methods exist to finish some plastic materials. One of them is dimethyl ketone, more commonly known as acetone. The use of acetone for ABS surface treatment (the most common material used in FFF printing technology) dates back to a few years ago.

There are many videos on YouTube illustrating more or less amateur methods, to achieve a treatment with acetone vapours and increase 3D print finishing.

But what are the real effects of treatment? Can they be measured? Is that which appears to be the preferred solution of each maker (who is ready to even take risks to create a treatment chamber with acetone vapours) really viable? 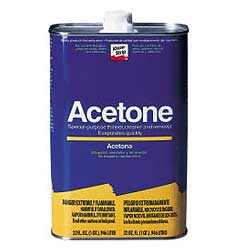 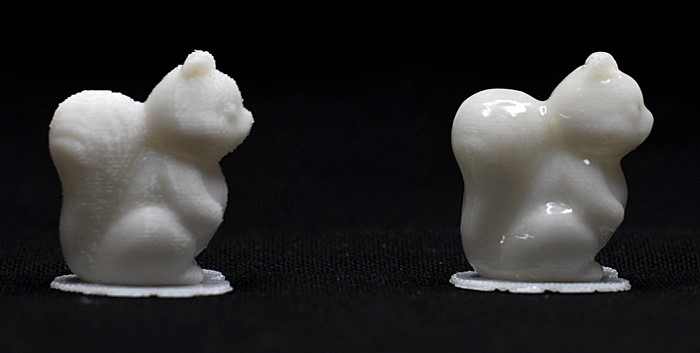 In a recent article, the improvements were laboratory tested produced by acetone vapour on an ASB part made with an FFF 3D printer.

The study was published in the journal “3D printing and additive manufacturing” (Publisher Liebertpub) by a research laboratory of an Indian university, the Guru Nanak Dev Engineering College (GNDEC).

Substantially, the experiment was conducted in this way:

1. First of all, the researchers identified the chemical treatment for the surface finish as the best choice compared to mechanical treatments, in terms of speed, cost and end result. Various objects were tested printed in ABS using an FFF technology 3D printer.

2. Initially, all of the objects had a roughness between 8 and 9μm and a SHORE hardness between 85 and 92 of scale D.

3. The surface treatment was accomplished by exposing the parts to acetone vapours with 99.5% purity for a maximum time of 20s.

4. The hardness was measured after the treatment, revealing an increase between 8 and 11% compared to the initial value.

So it has been scientifically proven: treatment with acetone vapours, on an ABS part made with an FFF 3D printer, increases surface hardness, improving to all effects this mechanical characteristic. 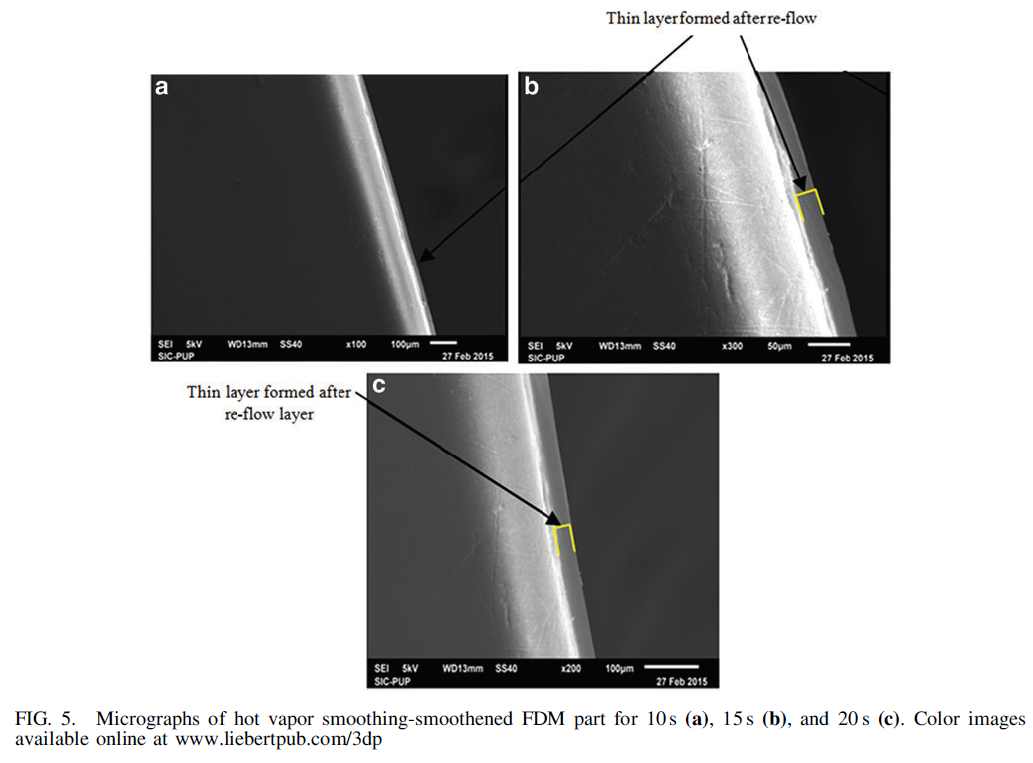 A subsequent analysis shows (see image above) that the chemical treatment produces a layer of compact material on the surface, which increases with the increase in the time of exposure to the solvent.

Unfortunately, the hardness increases to a maximum point, but starts to decrease after 15 seconds of exposure. This effect is probably due to the chemical degradation of the polymer chains in the presence of an excessive amount of acetone.

So the answer is yes: the perfect 3D print finish could be achieved with acetone vapour which, besides this, would also improve in all respects the surface hardness of the objects undergoing treatment. 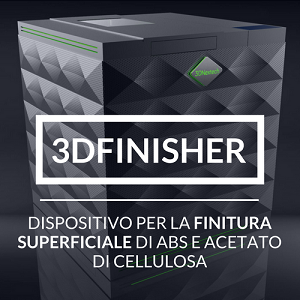